Welcome to our teacup pigs for sale in Arizona page.  We have been helping animal lovers adopt teacup pigs in Arizona for several years now. Since there are currently no legitimate teacup pig breeders in Arizona we are able to ship a pampered piglet to an airport near you safe and sound with free shipping!

Click here to see our available teacup piglets for sale

Our teacup piglet cost will vary depending on the color, age and the expected size (whether it is micro pig or Super Micro).  The term “teacup” is a little misleading. These little fellows can range in size anywhere from 15 pounds to 40 LBS. We have had some grown adults end up 8-15 pounds but those are extremely rare and when that happens it seems to be more random and not something we have been able to predict. We still receive emails weekly from people wanting a 5-pound full grown piglet. We have the smallest piglets in the United States and we have yet to see one grow to the size of just 5 LBS. It is important to keep in mind if piglets are not neutered or spade the tend to grow up to be larger therefore we HIGHLY RECOMMEND having your piglet spade or neutered. Breeder teacup pigs tend to get larger as well. If you are breeding a teacup pig you will want to make sure you add more food to their diet because they are eating for their piglets too. There are also different colors that typically will cost more.

Pink is one of the most desired colors so pink piglets usually sell for more than a more common color like black. Juliana and Chocolate are also very desired colors.

Size is the biggest thing to consider when it comes to teacup piglets. Many competitors sell piglets for 800-1,500 they take pictures of these piglets are just a couple days old!!! Not only is it unhealthy for the piglet to be taken away from their mothers at a few days old, it also is very unethical for these breeders to misrepresent their piglets that way. Most people do like how cute piglets look at a couple days old. The unethical breeders take advantage of this by posting pics of super young piglets. If you’re finding a “teacup piglet” for under $1,500 you are not getting quality bloodlines. Young piglets that sell for that cheap typically grow up to be 80-150 LBS. Be very careful of breeders that try to predict how many inches a piglet will be when they become adults. This is just a sales ploy. There is no way to guess what a piglet’s size will be when it is a few days old. True Teacup piglets won’t be mature enough to safely be weaned and go to a new home until after they are at least 12 weeks old.  You should not buy a teacup piglet online if there isn’t a current pic of it the breeder has of it over the age of 12 weeks old. There are some breeders who sell pot belly pigs that they call Teacup pigs.  There is even a Facebook group of pig enthusiast where their average mini pig grows to over 100 pounds. The Breeders do love pigs and to them 150 LBS pig is still adorable. You can easy find one of these larger pigs for under $1,000. There are other breeders you can find online locally that sell their pigs for $1,000-1,500 range Most of these pigs in this price range will get 80-150 LBS. Pampered Piglets has been around for several years. Has a great reputation of not only having the smallest teacup piglets but also being there every step of the way to answer all your questions!  We also offer financing to help so you can receive your piglets with just a down payment and make payments.  If you can’t afford to adopt a piglet from us call your local sanctuary. Some Sanctuaries are full of pot belly pigs that people were told were teacup pigs. Even though these pigs will be larger than a pampered piglet, a lot of them make loving pets and are in need good homes.

Below is a picture of a baby piglet that is taken at just a couple days old and is way too young to have its picture taken and put on a website for sale by a breeder. 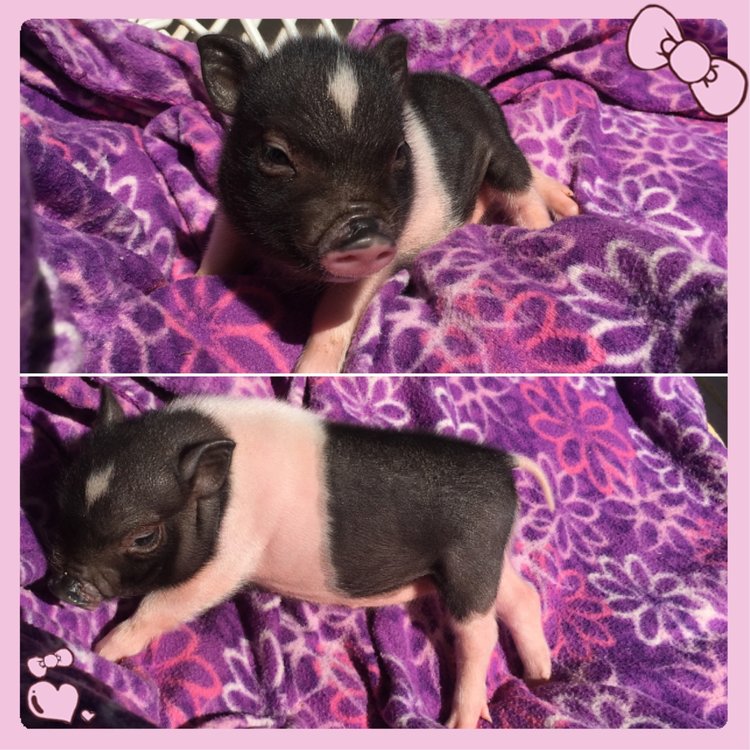 Are teacup pigs starved to stay small?  (some potbellies that are mistaken as teacup pigs are accidentality starved)

Unfortunately, some pigs are being starved by owners that have been duped into thinking they are getting a teacup pig from an unethical breeder, when they are really getting a normal potbelly pig. This can cause major health complications for these poor little piggy’s’. This is probably one of the scariest things that can happen if new pet owners buy a “teacup pig” from someone in the classified ad section or someone selling them very cheap online. Therefore, you want to only buy from a reputable breeder. Real teacup pigs will stay small if they are kept on a proper diet however if you put a pot belly pig on the same diet it will become malnourished and may die.

Super micro pigs are the smallest They are the likeliest to stay within the lighter side of the 15-40LBS average weight as an adult. The reality though is most of these are just names and descriptions giving to pig based on breeding practices and size of the parents and the grandparents. Juliana pigs are an actual breed. They are spotted like the piglet you can see in the picture. We will at times cross breed Juliana piglets with Super Micro pigs to produce unique and rare colors. 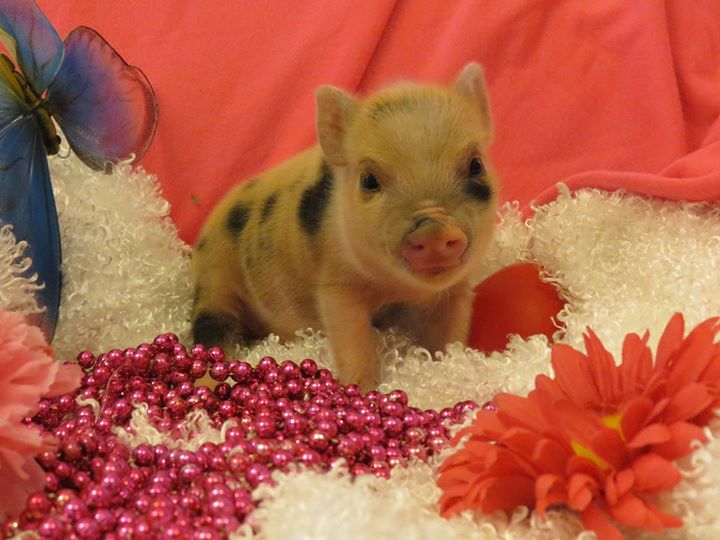 Are teacup pigs legal in Arizona?

Teacup pigs are now legal in most cities. It is still a good idea to check your local city ordinances. You can do this through a simple Google search. If your city specifically mentions no swine, you may want to consider a different pet or moving to a different city. In most cities, you won’t have anything to worry about.

How much do teacup pigs weigh as adults?

Our teacup pigs weigh on average. 15-45 LBS as long as they are kept on the proper diet. Most teacup pigs grow until they are 4-5 years old. Again, we have the smallest teacup pigs in the United States and our piglets keep getting smaller every generation.

Can Teacup pigs stay in apartments?

It depends on the apartment and if you will have free time to take the pig on a walk at least once a day. Also, pigs do a lot better if your floors are not too slippery. Some hard flooring can make it difficult for them to run around on. A pig will also need its own place like a bed or a pen where it can relax and have some alone time in. We have had many people adopt from us who live in the city. Just like any animal you just want to make sure you give it some exercise.

Can teacup pigs be housebroken?

Teacup pigs are very smart and just being a few days old they will jump in and out of a litter box to go to the bathroom. When a piglet gets to a new place it will most likely need to get use to the new place and where you want it to go potty. You can either train the pig to go to the bathroom outside or in a litterbox. When you are first training, the piglet make sure that you keep them in a smaller place and not let them roam a bunch until they are using the litter box. Be patient with the piglet and remember teacup pigs respond better to positive reinforcement rather than negative reinforcement.

What is the easiest way to be able to distinguish between a regular pig, a pot belly pig, and a teacup pig?

There first thing to look at is the ears. Normal size pigs have floppy ears while teacup pigs have more straight ears. That is will weed out normal pigs from pot belly pigs and teacup pigs. Next thing to look at is the pictures on the website. If a breeder is putting on piglets that don’t have a lot of hair or look very young than you should avoid buying from them. Most people like the look and cuteness that piglets have when they are just a couple days old. Some breeders take advantage of this by taking pictures and taking the piglets away from their moms at a very young age just so they can sell the piglet and make a few bucks. True teacup pigs must be weaned at an older age. Make sure you ask the breeder to send you an updated pic before you buy a piglet from their website.